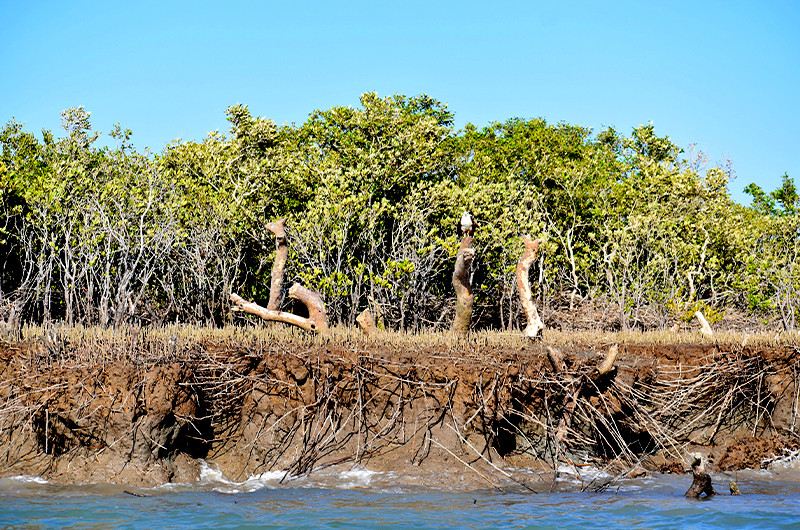 The sun gradually started rising and lit the sky with its soft rays in a pleasant morning. A slight cool breeze blew gently, providing fresh breath. We embarked on our journey towards Keti Bandar, once a port city in district Thatta of Sindh.

A road to Keti Bandar did not turn out to be an easy one. Many shocks were waiting for a person who was travelling for the first time to a region, which may rightly be called ‘unfortunate’ to say the least.

Scores of small huts made of wood and dry straws were scattered over acres of land. In between, the ‘road’ was extremely rough and bumpy.

After passing through these huts, pieces of land covered with bamboo shelters began to appear on both sides of the road. When inquired, it was revealed that these were plantation of Betel Leaf (paan).

At the end of the three-hour-and-45-minute journey, we reached our destination. After a brief stop and having a chat with the members of local community, we moved to Mero Dablo, a fishing village on the edge of the Arabian Sea.

In Mero Deblo, mangroves cultivation welcomed us with a bonus of fish farm. Several women were busy in mangroves plantation.

“Humans, animals and birds all take shelter in Tamar (mangroves). Fish is our livelihood, which also grows in mangroves forest. Our women and men protect mangroves from animal grazing and illegal logging threats. If we do not guard them, we will lose our livelihood,” said 55-year-old Hajira Bibi, a grower and guard of mangroves in Mero Deblo.

“I have been working in mangrove nursery for the last two years. We have to protect vulnerable young mangroves from grazing camels and buffaloes as well as from illegal loggers,” she added.

According to WWF-Pakistan, mangrove forests are one of the most productive ecosystems and around 500,000 people directly rely on the mangroves services in the Indus Delta. The mangrove swamps of Sindh’s coastal zone are a sweeping 600,000 hectares – a total 95 per cent of the mangrove population in the country. However, mangroves are continuously on decline due to the rapid deforestation taking place. Both climate change as well as urbanisation and industrialisation have impacted mangrove shrubs. With the help of regional cooperation, schemes by UNESCO, ADB, IUCN and UNDP, which include ‘Environmental Protection and Management project’, ‘Mangrove Plantation for rehabilitation of Korangi-Phitti creek system’, ‘Development of Mangrove forests in the Indus Delta’, ‘Working Plan of Mangrove Forests of Indus Delta from 1985-2005’, have all worked in its restoration.

However, a substantial decline in mangroves, still persists. Specifically, in the Indus Delta Mangrove forests, out of the eight species previously found along the coast, four have completely vanished. Additionally, three species are on the verge of extinction and only one species, the Avicinnia Marina, survives in the Indus Delta.

The loss of mangroves in the coastal areas have led to a reduced reproduction and procurement of commercially important fish, loss of livelihood of fishing communities, increase in coastal erosion and reduced availability of wood.

The coastal communities of Pakistan’s Indus Delta depend upon on the rich mangrove ecosystem for their survival and well-being. In the past, unsustainable and haphazard harvesting of mangroves, sea water intrusion, rising sea levels and other factors posed serious threats for mangroves of Indus Delta.

Climate change threat to Indus Delta means threat to food security and livelihood of coastal communities which is solely depend on sea and mangroves. This situation rang the alarm and forced global players to take notice and come out with some assistance to control the damage. As a result, Asian Development Bank (ADB) provided ADB provided $36 million to the Sindh Coastal Community Development Project in order to reduce poverty in coastal communities and protect the fragile mangrove ecosystem of the Indus Delta.

Under this development programme, local residents along with Sindh Forest Department plant around 800,000 mangroves sapling in the creeks in a single day and registered themselves in Guinness Book of World records in 2013. Since then, local communities not only plant mangroves but also protect them from grazing, illegal logging and other threats.

Indus Delta, a home of world’s largest arid mangrove forest witnessed women’s active participation in plantation and protection of mangroves which gives them although at minimum level, some financial incentive.

“WWF-Pakistan has been working to address Gender-Specific Challenges linked to climate change vulnerability along the coast of Pakistan. Efforts are focused on supporting to improve the lives and livelihoods of these natural resources linked to women community members, which yielded engagement of over 300 women from the Indus Delta in alternate livelihood and capacity building initiatives,” Dr Tahir Rasheed, Regional Head (Sindh and Balochistan), WWF-Pakistan said.

Under the mangrove protection program in Mero Dablo, women were given incentives in the form of sewing machines, ponds for fish to improve livelihood. The women hired for the plantation and protection of the mangroves were also paid a small stipend.

Along with mangroves, alternative sources of livelihood are also helping local community of the area to meet both ends with ease.

The story of Zaitoon Deblo, aged 43, a mother of four children, took new turn when she was given a sewing machine.

“I was unemployed and searching for work to earn bread and butter for my family. WWF-Pakistan provided us with a sewing machine and solar light. Now things become much easier for me. By sewing clothes, I am able to earn money. I charge Rs 500 for stitching men’s clothes and Rs 250 to 300 for ladies suits,” said Zaitoon Deblo.

Engagement of local community, especially women, is crucial for the successful creation and implementation of alternative livelihood in the remote areas like Indus Delta. Small initiatives could bring big change in the lives of many.

Rafiul Haq, a Karachi-based consultant ecologist while talking about alternate livelihood for women said that initially women in the area were engaged for the cultivation of mangrove nursery. This was the underutilised work force. Their overwhelming participation has changed the scenario.

“Now poultry farming and kitchen garden would be served as an alternative livelihood for these women,” Rafiul Haq further added.

The economic significance of Indus Delta’s mangroves reflects from the fact that they contributes nearly $100 million annually in the country’s economy in the form of fish, lobsters, crabs and shrimps breeds.

As far as Indus Delta is concerned, it provides livelihood and employment to over 100,000 people associated directly with the fishing industry, stated Mangroves for Future, an initiative to promote investment in coastal ecosystem conservation for sustainable development.

Most households on the delta rely on fishing, and preserving mangroves which is a key in maintaining the marine ecosystem.

Salim Deblo, a 39-year-old resident of Mero Deblo is also an example of resilience of local community against climate change. He was a jobless youth with no skill and other source to earn livelihood but now he is not only able to earn decent amount but also giving employment to other community members.

“I started a fish pond after receiving training and financial assistance from an NGO. It ended up being a life changing experience for me. Earlier, a single fish was sold at Rs 500 but after learning proper fish farming techniques and using them in fish ponds, this season we have sold one fish for Rs 8,000. Now we are making crab farms as well,” said Salim.

Women mangrove guards also emerged as a source of encouragement for many others. Now more and more men and women of the area are considering mangroves plantation, fish and crab farming as lucrative livelihood opportunities one could not have imagined a few decades ago.

Asifa Idrees is a Karachi- Based environmental journalist and tweets @asifaidris